Transferability of lessons from ‘Connected Cities’ to classic rail

As the final strand of the High Speed Rail project, the ITC made one final consideration about whether and how the lessons learned in HSR and Connected Cities are transferable to the classic rail experience. In Autumn 2016, we held a workshop with a range of industry experts that provided insight into the ways in which these lessons were applicable to the classic rail system here in the UK. These insights were translated into the project’s final report Classic Rail and Connected Cities: Capturing the benefits from rail system development which was published in April 2017. 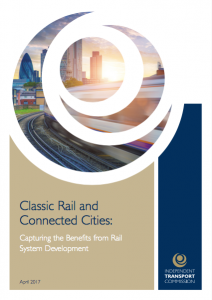 Following the original five principles that were identified in HSR and Connected Cities as essential for getting the UK’s city regions ready for the arrival of new rail infrastructure, this report details how they are also highly applicable to infrastructure investment on Britain’s classic rail network. The five core principles are: be responsive to change, make the place a catalyst for growth, be connected and accessible, collaborate to succeed, and make stations places of arrival and exchange. In fact, the ITC even identified a sixth principle  of crucial importance: rail planning processes need a stronger mechanism for delivery. The purpose of the report was to recommend that these principles are adapted and incorporated into rail infrastructure planning and delivery to capture more of the value added by rail infrastructure and to ensure that the benefits are shared more widely across regions. 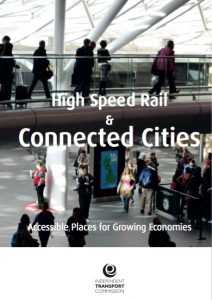 Our final report was released at a major launch event in Leeds on Monday 16 May 2016 with speakers including Bridget Rosewell OBE (National Infrastructure Commission), Ben Still (West Yorkshire Combined Authority) and the Secretary of State The Rt Hon Patrick McLoughlin MP. You can find a summary of the afternoon presentations and discussions here.

High Speed Rail and Connected Cities: Accessible Places for Growing Economies reports on the findings from a series of regional workshops that the ITC held with local authorities, institutions, businesses and civil society groups in England throughout 2015 where participants were invited to present their current plans and vision for their city region as well as their specific aspirations for HS2.

This publication reviews current proposals for the city regions served by HS2 using the insights drawn from Ambitions and Opportunities and the regional workshops. It provides guidance on ways to enhance the process of urban change in order to maximise the economic and social benefits that arise when HSR is integrated within the wider UK rail network, improving connectivity both within and between the city regions.

Our objective is that the two ITC reports will be a resource for our cities and regions as they prepare for the arrival of HS2, alongside our comprehensive list of HSR resources which you can find here. 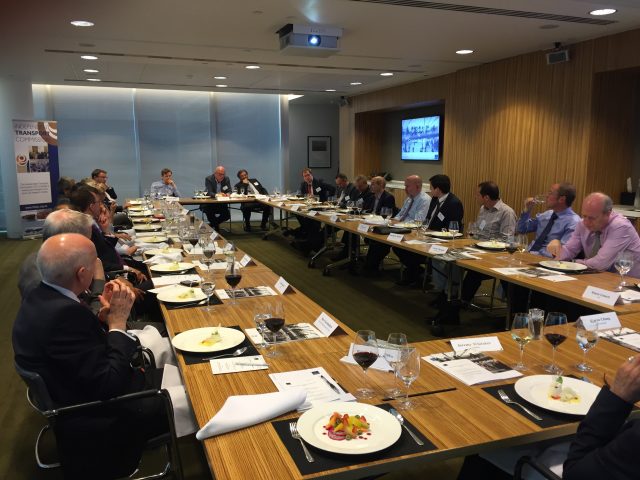 To accompany the official launch event that took place in Leeds, the ITC hosted an exclusive roundtable dinner discussion in late June. Generously hosted at the stunning offices of Eversheds near St Paul’s, the dinner brought together select industry experts and core supporters of the ITC to further explore some of the opportunities and challenges presented in the Connected Cities report. The evening was chaired by Dominic Lacey, Partner at Eversheds, and we were delighted to welcome The Rt Hon Lord Adonis PC, Chair of the National Infrastructure Commission and an ITC Patron, to give a response.

If you would like to get in touch regarding any local initiatives, or are interested in engaging in the legacy of this project, please get in touch with Project Chairman John Worthington MBE at john@worthington.gb.com

The ITC’s study on the Spatial Effects of High Speed Rail in Britain has had a major impact on the national debate, and we are currently completing Phase 3 of the study, entitled Disseminating the Insights. This phase has seen the ITC exploring the insights from the main report Ambitions and Opportunities with the city regions throughout 2015 in a series of workshops. The workshops were held in Birmingham (2 July), Sheffield (7 July), Leeds (16 July), Nottingham/East Midlands (21 September), Manchester (15 October), and Crewe (29 October). The aim of the ITC city workshops has been to:

With support from Transport for London, we hosted a final Symposium in London (11 November) that saw a number of high-profile speakers and attendees, including Lord Adonis (National Infrastructure Commission), Michèle Dix CBE (Crossrail 2, TfL), and Victoria Hills (OPDC).

The outcome of the workshops is a major report entitled High Speed Rail and Connected Cities: Accessible Places for Growing Economies, offering general principles related to the insights from the ITC’s research, identifying what is special to each city, and how initiatives can be tailored to capture the greatest value for each place. These initiatives can be used as a guide for action.

The outcome will mark the end of this phase of the ITC HSR research project. 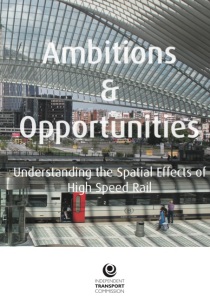 The principal output of Phase 2b was the report Ambitions and Opportunities: Understanding the Spatial Effects of High Speed Rail which covers insights from the first phases of the study. The report was released on Thursday 20 November 2014 at a major launch symposium in King’s Cross with speakers including Cllr Sir Albert Bore, Sir David Higgins, and Secretary of State The Rt Hon Patrick McLoughlin MP. You can read the Executive Summary here.

The report is a compilation of the lessons learned from the evidence accumulated through papers submitted, workshops in the regions, expert input, case study field trips in France, Belgium and the Netherlands and the insights of participants from the cities, regions and organisations that will be engaged in the process of transformation triggered by a planned programme of major infrastructure investment.

We also have a short summary of the Symposium group discussions available here that took place directly after the official report launch.

From all our research throughout the project, and particularly with the main Ambitions and Opportunities report, we have amassed a huge reference library on High Speed Rail, which you can find a link to in the Connected Cities section above.

Throughout June and July of 2014, the ITC held a series of three expert panels (summary notes below) to further explore some key themes that emerged throughout the project:

In addition, we ran a series of three study visits with a select group of participants who were best suited to learn valuable lessons from each place visited. These study visits took us to:

Phase Two, Capturing the Value of Major Infrastructure: Learning from Europe, aimed to learn from international experience about how we can maximise the benefits of major infrastructure investment.

The first part of this Phase was a symposium based in Lille (5-6 February 2014) which began on the first day with participants splitting into two groups for field excursions, one to Rotterdam and the Randstad and the other to Paris. The second day, hosted in the Hotel Carlton, comprised of in-depth case studies from Lille, Bordeaux and Schiphol airport and its region.

The outcome of these visits and discussions in Lille allowed the ITC to form a series of insights that were further explored in the final stage of the review. To coincide with the publication of Lord Deighton’s Growth Taskforce report High Speed 2: Get Ready, the ITC published a summary report entitled Learning from Europe: The Lille Symposium (March 2014) that contains insights and initial conclusions for the UK’s rail modernisation programme.

Phase One: Call for Evidence 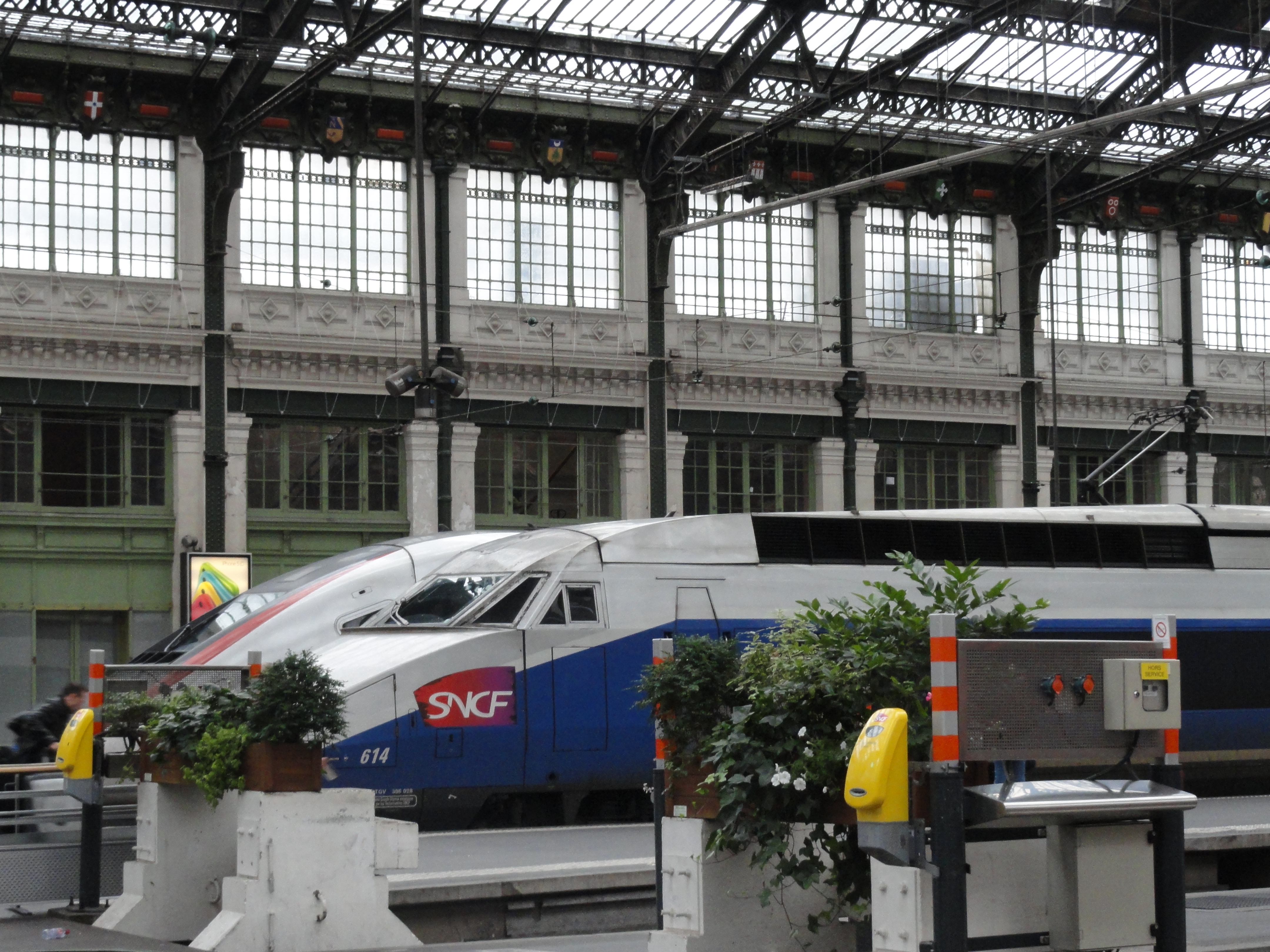 Phase One proper began with a national Call for Evidence in Autumn 2012 to canvass opinion, evidence and ideas. The call attracted responses from over 35 individuals, private organisations, and public authorities, which can be found here on our website.

The Call for Evidence was supplemented during Summer 2013 with a regional workshop series in Birmingham, Leeds, Manchester and London for key decision makers representing stakeholders from the public, private and civil sectors, alongside those who submitted evidence. The review of domestic evidence concluded with a symposium in London (July 2013) drawing together participants from London and the city regions. A study paper, entitled Capturing the Opportunity, summarising the findings from Phase One of the review was published October 2013 in time to contribute to the public debate.

You can find write-ups from all our Regional Workshops throughout the Summer of 2013 in the links below.
Birmingham / Leeds / Manchester / London

The first phase, called Phase Zero, included a study scoping paper and was commissioned from Charles Landry, author and urbanist, to help scope and frame the main research study. This included a study workshop at Stephenson Harwood. Landry’s paper argued that a successful HSR strategy for the UK would need to be holistic and incorporate the most significant economic, spatial, social and cultural issues.