The contribution of Peak and Off-peak travel to the Urban economy. 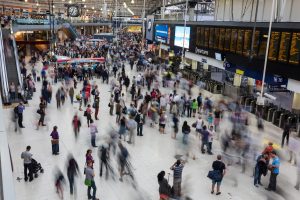 This work stream follows an earlier ITC study exploring the impact of High Speed Rail on our cities. In collaboration with the DfT’s HS2 team, led by Dr David Prout, the ITC ran a series of international study visits to collect evidence on the experience of HSR investment on cities in Europe, and applied the lessons discovered to those UK cities that will be served by HS2. The reports, entitled Ambitions and Opportunities, and Connected Cities, were launched by the Secretary of State for Transport, and attracted widespread coverage in the national media.

The ITC is now exploring how peak and off-peak travel patterns are changing, as well as the economic effects of peak hour travel, which are currently not widely understood. Yet there is some indication that a broader ‘peak’ travel period is related to the size and vitality of a city. The economic contribution of off-peak travel is also not widely understood. Certain kinds of travel purpose are likely to be of greater value to cities than others. Significant growth in off-peak travel has been reported in recent years across many global cities, including London and New York.There is a tension between the advantages cities draw from a busy peak in terms of justifying transport infrastructure investment, and the problems it causes with congestion and overcrowding. The ITC’s research will allow us to understand what is happening during off peak periods in terms of travel behaviour, and the implications for urban planning and economies.

The study commenced with a national Call for Evidence that provided insights into the ways in which peak hour travel patterns are changing and this was presented in late 2019 to the DfT Strategy Committee. A copy can be downloaded here.

The ITC has since been running a series of policy workshops to explore the implications for local and national decision makers. The findings from these sessions will be compiled into a new report by the end of 2020.